Hi! I'm Kristin. I love to cook, garden, entertain and create. I like to keep my cooking fresh and healthy, but life's too short to not eat dessert. :) I fantasize about living on a The Best Thanksgiving Day Side Dishes

The hardest part of Thanksgiving, for me, is deciding which of my favorite Thanskgiving day side dishes to make.  Since I’m usually not feeding 100 people I can’t make everything, but I usually do anyway! 🙂  Well I’ve narrowed it down for you with a few of my favorites.  These are tried and true recipes that will not fail to impress your guests. I found this recipe last year on Natalie’s Daily Crave and now this is a must have recipe for Thanksgiving.  I am salivating just thinking about it.  It is creamy, cheesy goodness with just a hint of horseradish flavor.  This will turn any brussels sprout hater into a lover. I have made this recipe several times and it always get a lot of compliments.  It’s Paula Deen so you know it’s going to be rich and buttery.  I mix in the cheese instead of putting it on top, but either way would be delicious. This side dish is almost dessert, but since it’s a Cooking Light recipe you don’t need to feel any guilt.  Does anyone really feel guilty for indulging on Thanksgiving? I have not made this cranberry relish recipe before, but it is on my list for this year.  I love orange flavor with my cranberry and I think the ginger will add an interesting zing to it.  Can’t wait to try it! I usually don’t follow a recipe for my stuffing, but I found this one that is pretty similar to how I make it, with the exception that I use Italian sausage instead of breakfast sausage, but either would be good.

Of course I have to have green bean casserole.  I just follow the recipe on the fried onion container and I use frozen beans, not canned.  I also make mashed potatoes and gravy as well as some turkey.  So invite 100 or so of your friends and make all these great recipes, or just pick a couple of your favorites! 🙂 My obsession with figs is a relatively new thing.  I probably had never eaten a fresh fig until my friend gave me some from the tree that was growing at a house she was renting.  I sliced them, put them on my greek yogurt and drizzled them with honey.  I was hooked.  It was then that I decided, that I too must have a fig tree. After taking the Arcadia Edible Garden Tour last year and seeing an  espaliered fig tree, I knew I must build an espalier for my fig tree.  This would help keep the fig tree manageable and make reaching the figs relatively easy.

This is how it will look someday!  (Hopefully) Anyway, on to the Caramelized Fig Ice Cream with mascarpone and candied pecans.  Another friend of mine has a giant fig tree at her condo (I know, I pick good friends, right?).  She had tons, literally tons of figs, so she gave me half a ton.  Okay, maybe I exaggerate a little.  She gave me a large quantity of figs so I decided to make fig ice cream.  I searched the internet and found this recipe from Happyolks.  I used a different ice cream recipe and candied pecans instead of the honey roasted pecans and it was delicious.  My niece agreed.  I think she was a little disappointed the next time she came over and I told her that I had eaten it all.

First I made the caramelized fig mixture.  I could have just eaten it with a spoon, but decided I should save most of it for the ice cream.  After I cooked the mixture, I let it cool and refrigerated it overnight. Then I started the ice cream base.  In a sauce pan I combined milk, cream and 1/2 cup of sugar.  I cooked it until the sugar was dissolved.  While the milk, cream and sugar mixture was heating up, in a separate bowl, I beat the eggs and 1/4 cup of sugar until they become thick and pale yellow.  It looked like this- Next I took a 1/2 cup of the warm milk mixture and beat it into the egg mixture.  Then I slowly added the egg mixture into the pan with the milk mixture.  I cooked it over low heat until it thickened and the mixture coated the back of a spoon.  About 7-10 mins.  I poured the mixture through a mesh strainer and then stirred in vanilla extract and cooled it overnight in the refrigerator. The next day, I froze the ice cream.  This is the most exciting part, because I got to finally taste the ice cream.  Ice cream is not a good thing to make if you need instant gratification.  It is a long project.  When the ice cream was almost frozen, I poured in the fig mixture, nuts and mascarpone.  I dropped little spoonfuls of mascarpone so it wouldn’t be one giant lump.  I froze the ice cream for a few hours.  It was worth the wait.  I need to make more soon.  Hopefully I can use my own figs this time! 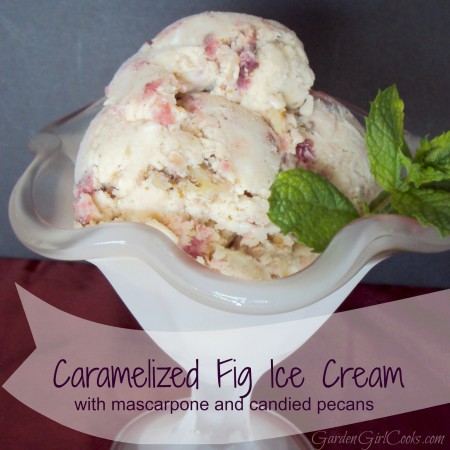 I was craving strawberry shortcake.  I usually need an excuse to make dessert, otherwise I will end up eating the whole thing.  So I decided to make these cupcakes for a little get together I was having.  My friends that moved away to Colorado, were going to be in town for a wedding, so we planned a little reunion party with all our old co-workers.  It was really fun and great to see everyone.

Strawberry shortcake is probably not the best dessert to serve to a big crowd.  Who wants to assemble a large quantity of strawberry shortcakes?  Not me!  I thought strawberry shortcake cupcakes would be perfect, so I started my search for the perfect cupcake and frosting recipe.  I came across this recipe from Damn Delicious and thought it sounded really good.  I doubled the recipe and it made about 24 cupcakes in a regular size cupcake pan.  I couldn’t find freeze dried strawberries for the frosting so I decided to see what other strawberry buttercream recipes I could find.  I found this recipe from Add a Pinch.  Instead of the strawberry syrup I used strawberry jam.  I used a natural strawberry jam with no added coloring and the frosting came out a little off white, so I had to add some red food coloring.  I really don’t like to use food coloring, but I didn’t want to have ugly cupcakes.  I should make my own red food coloring out of beets 🙂  I will put that on my do to list! 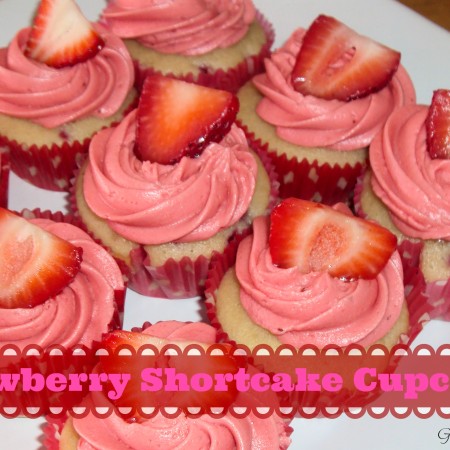 I was reminded of a chopped salad I had at Citizen Public House in Scottsdale when I was at a party and was served a similar salad.  The following day I found the recipe online.  I had to make it.  You should too.  It’s easy and so delicous.  The salad actually has it’s own facebook page, you can visit here.   Next time I make it I’m going to try a differnt combination of ingredients.  I’m thinking pear, blue cheese, candied pecans or bacon, blue cheese, avocado.  The comibnations are endless.

I don’t like salmon and I couldn’t find dried currants or dried corn, so I nixed the salmon and used dried cranberries and  frozen corn.  You could also add chicken to make it a more substantial salad.  I also like to throw in a hand full of chopped romaine lettuce to make it more like a salad.

You can view the original recipe here. 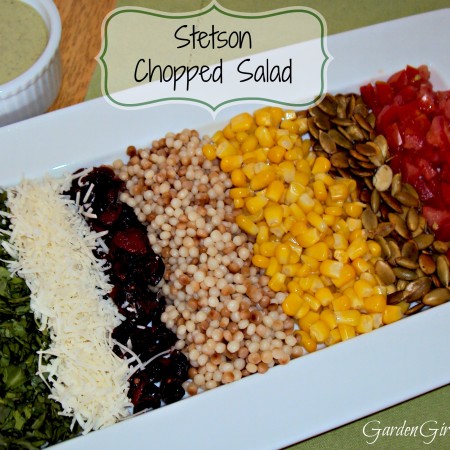 I love Spicy Thai Basil Chicken.  If you see me at a Thai restaurant eating anything else, call the police.  It’s a sign that I’ve been kidnapped!  When I saw a Thai basil plant for sale I couldn’t believe my eyes.  That was about 3 years ago and it has now taken over at least a third of my flower bed, but I don’t care.  Last year I found a Thai Chili pepper plant, so of course, I had to get that to go with my Thai basil.  They have been best friends ever since.  See how cute they are! You may be intimidated to cook Asian cuisine, but it is actually quite simple.  Once you get a few key staples you will be on your way to cooking restaurant style take out food every night of the week. Ingredients from my garden on left. Sauteed veggies on right. 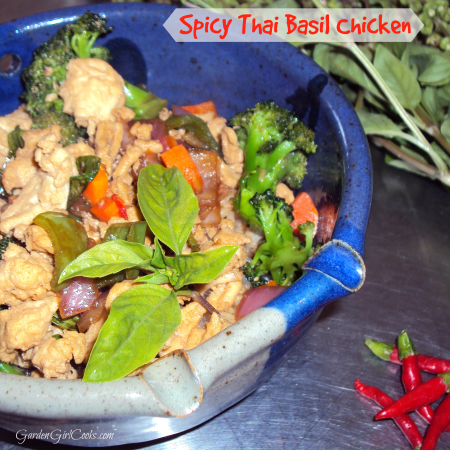 I recently visited one of my favorite Phoenix area food trucks, Short Leash Hot Dogs, at their brick and mortar location, Sit…Stay.  If you are ever in the Phoenix area you must check them out.  They have a variety of locally made weiners and toppings that they serve on the softest naan bread you will ever eat.  Their most interesting concoction, Bear, has peanut butter, Cracker Jacks, smoked Gouda, bacon and BBQ Sauce.  It is a must try!  I was excited to see that their restaurant had quite a few extra menu items including this Fried Green Tomato Stack.  I love fried green tomatoes and I don’t see them on many menus so I had to try it.  It was amazing…  so much so that I decided to visit my local farmer’s market the following day in search of green tomatoes.  I was so excited to find some, along with some fresh Arizona corn.

I sliced the tomatoes about a quarter of an inch thick and dredged them in flour, egg and then panko flakes.  I fried them in a little vegetable oil in my cast iron skillet.  I love finding ways to use my cast iron skillet.  If you don’t have one, buy one.  They are relatively inexpensive and perfect for a variety of recipes.  After they were golden brown I drained them on a cooling rack.  I assembled 3 high and layered sliced avocado in between each tomato.  I topped with bacon, fresh corn kernels that I sauteed in a little bit of the leftover bacon grease, and a few arugula leaves.  I then drizzled blue cheese dressing over top.  I ate this for lunch…and dinner 🙂 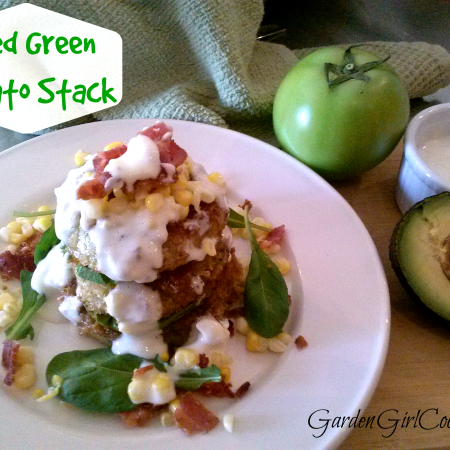 Hi! I'm Kristin. I love to cook, garden, entertain and create. I like to keep my cooking fresh and healthy, but life's too short to not eat dessert. :) I fantasize about living on a Read More...